Cuckoo SandBox:Automatic Malware Analysis Tool
1. Cuckoo Sandbox is a malware analysis system tool which allows you to throw any suspicious file at it and in a matter of seconds it will provide you back some detailed results outlining what such file did when executed inside an isolated environment.It is written 100% in Python, the architecture is very interesting and it is based on a virtualisation engine like Virtual box to maintain a “fresh” pc always at hand to run the malware called the client, inside this client it is run as an agent that is also written 100% in Python to monitor the different calls that the malware do to the dll’s, host that try to connect, etc.The connection between the Server and the client is done through an isolated network set up by virtual box, it is configured that way in order to avoid the propagation of the malware and to communicate effectively between the client and the server to send the analysis report, infected binaries, etc.This post ahead brings you a step by step screenshot to download and configure this excellent tool,will be good for beginners in cyber security/penetration testing to play with and see results immediately.Though from the looks of this post below,the procedure looks cumbersome and complex,but I have made attempts for a naive to understand and follow up screenshot wise,any queries still will be most welcome :

WHAT IT DOES PRECISELY?

2. Cuckoo can produce the following types of results:

KINDS OF FILES FOR ANALYSIS

3. The following kinds of files can be analysed and put for check in cuckoo :

More about Cuckoo at the video below and http://www.cuckoosandbox.org/

PRELIMS TO SETUP YOUR SYSTEM

4. Be ready with the following :

- Linux OS as parent OS
- Virtual Box installed with Windows 7/Xp
- Adequate RAM around 4 GB in all with the parent machine.
- i3 processor and above will help u lessen wait and make u patient

5. Python comes preinstalled with the Ubuntu Desktop,but we need some extra python libraries as follows :

Firstly we will install all the above mentioned libraries vide a single command.You need to slect the below text and paste as it is in the terminal

Besides above,there are other python libraries that need PIP for installation.Pip is an alternative to Easy Install for installing Python packages and is largely recommended when used in virtual environments.

another important library tcpdump is required to be configured to allow Cuckoo to make use of it without requiring root.

Cuckoo requires Yara 1.7 or higher and to install yara,run the following command

Pydeep depends on ssdeep 2.8+ and ssdeep needs to be compiled from source and likewise for Pydeep. Before doing so, a few packages are needed. The following commands will work :


We also need to install “git’:

Now cd to the directory Download, clone the pydeep project and install manually:

Then download yara form the git repository and install it:

Now we need to install yara-python with the following commands:

Volatility supports memory dumps from all major 32- and 64-bit Windows versions and service packs including XP, 2003 Server, Vista, Server 2008, Server 2008 R2, Seven, 8, 8.1, Server 2012, and 2012 R2 but in recent past now on supports Linux memory dumps in raw or LiME format and include 35+ plugins for analyzing 32- and 64-bit Linux kernels from 2.6.11 - 3.16 and distributions such as Debian, Ubuntu, OpenSuSE, Fedora, CentOS, and Mandrake.VOLATILITY is to be installed next,we need the following commands:

Once u download this, extract it and install it:

First we need to clone the git directory wherever we want to install Cuckoo, and we install it in /opt directory with the following commands:

Now we shift our attention to configuring networks for Virtual Box and parent machine.So I assume you have installed Windows 7 in virtual box with Adobe,Microsoft Office and a Mozilla/Chrome browser. 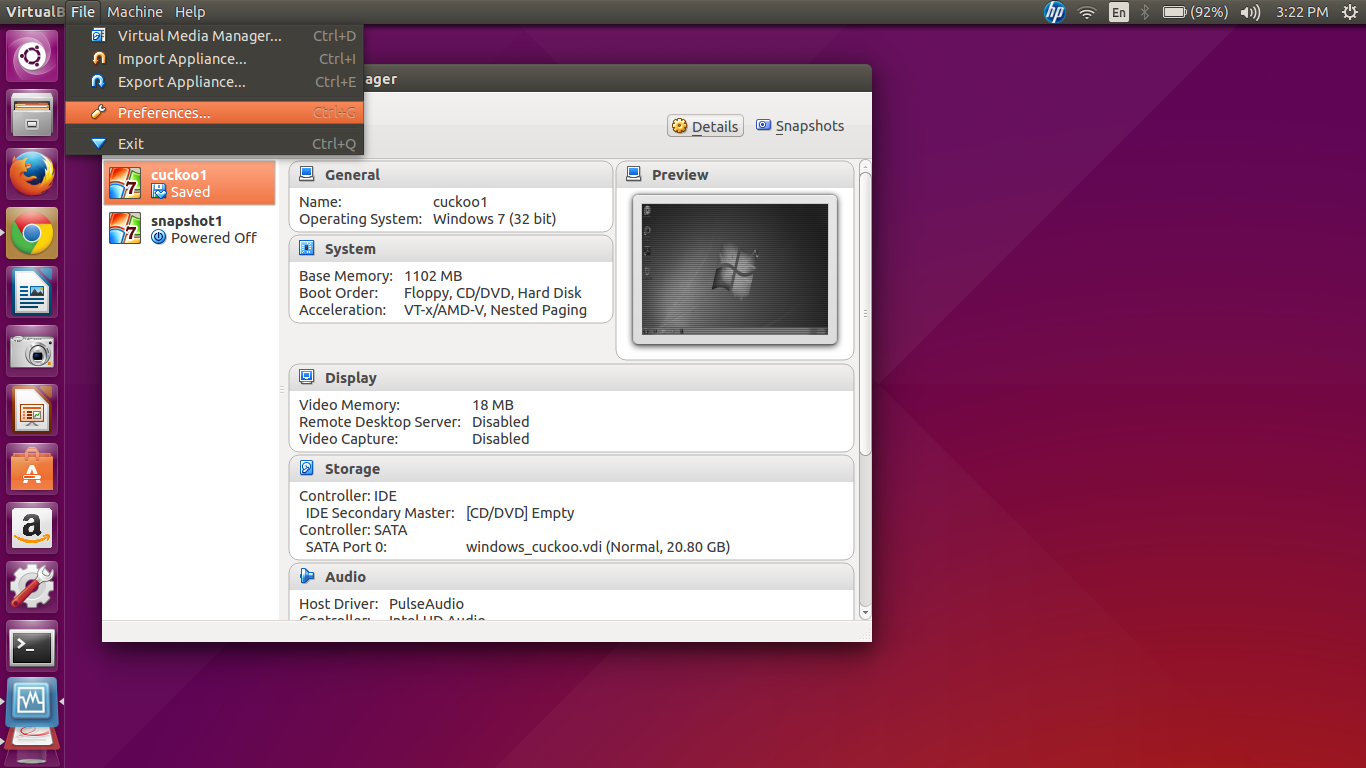 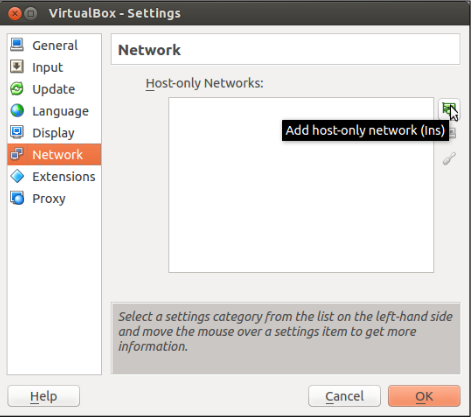 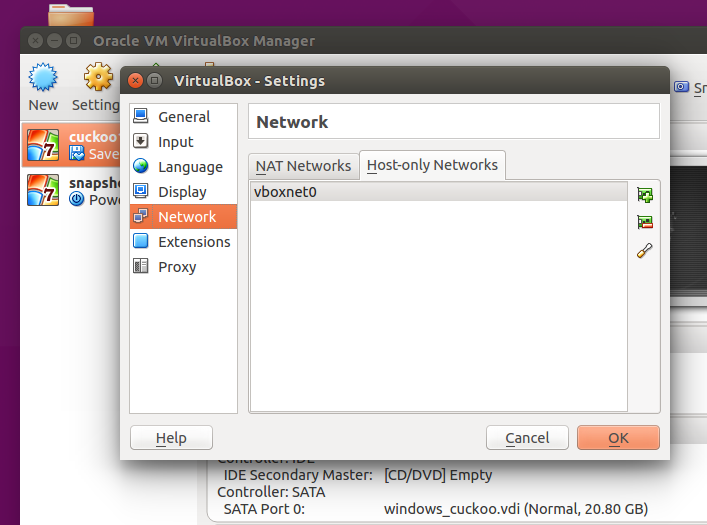 Configure as shown next below : 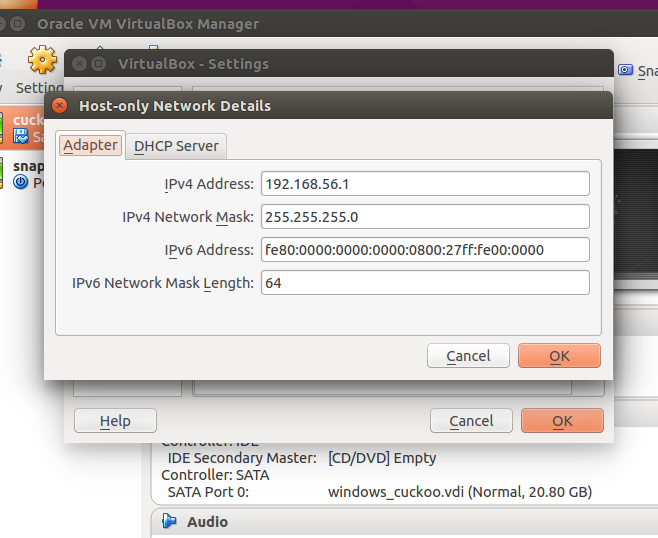 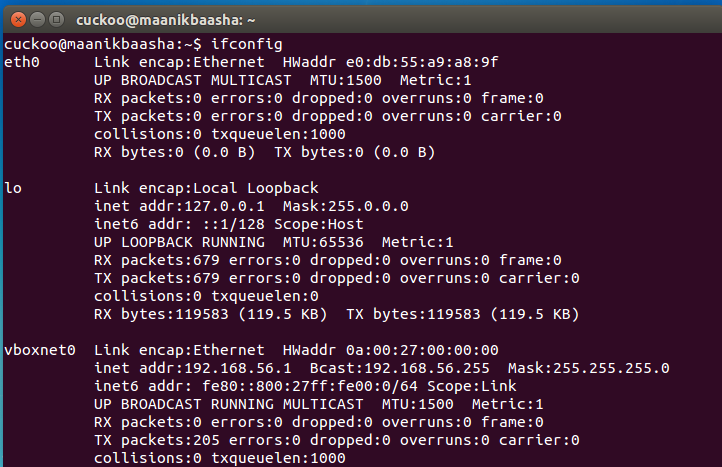 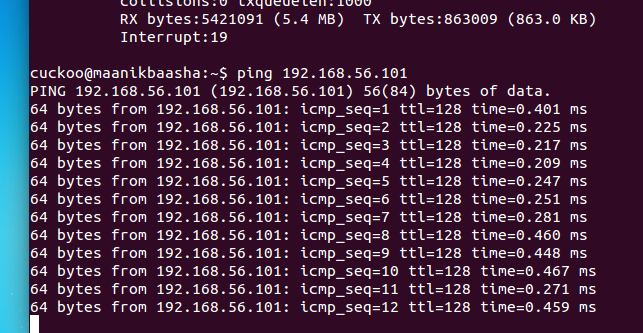 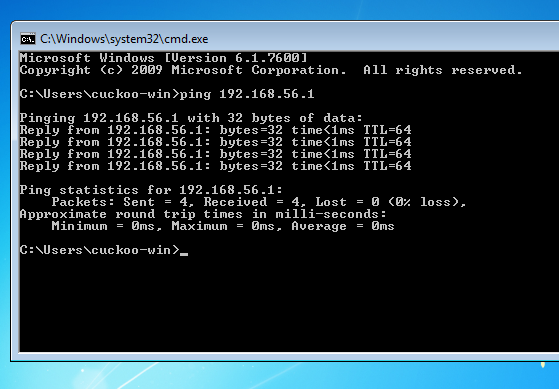 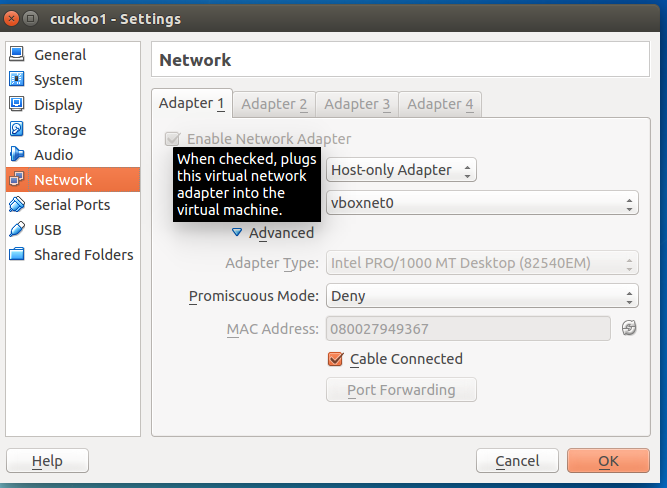 Vide the above,the two IP addresses I have configured to ping are :

Just ping from each IP to other,if they ping all is set now to work ahead.

and one important step that remains is to configure the conf files in the cuckoo configuration,Few important configuration files that we effect to work with are mentioned below with brief functionality:

There are a few things required to be changed in the configuration files as follows:

snapshot = [the name of the snapshot taken with virtual box]

key = [key of the virus total API, could be obtained registering in http://www.virustotal.com

Now we can run Cuckoo after all the hardwork :

run the command as shown below and you should get the screen as below : 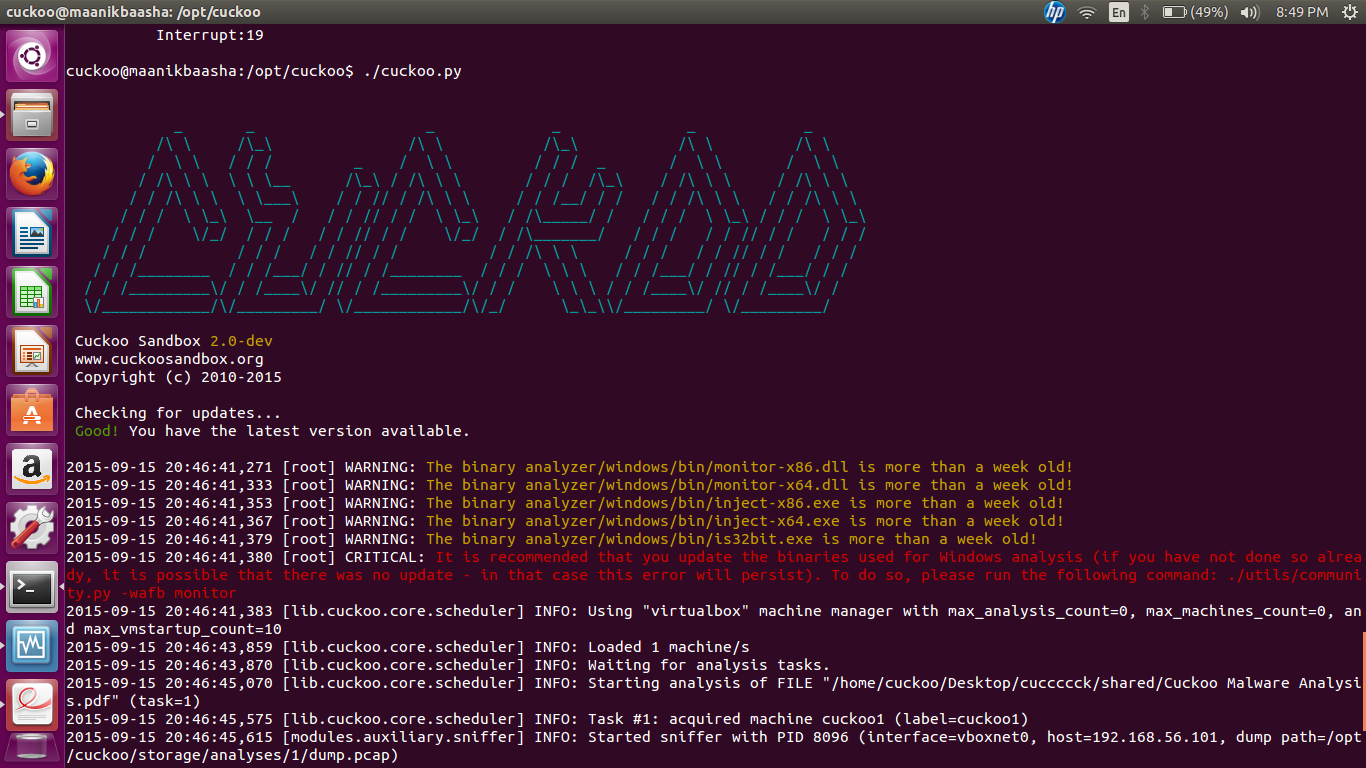 Now we need to do a submission of a file vide a script as shown below :

or as I type for my screen shot command :

or there is a way for a web interface too : 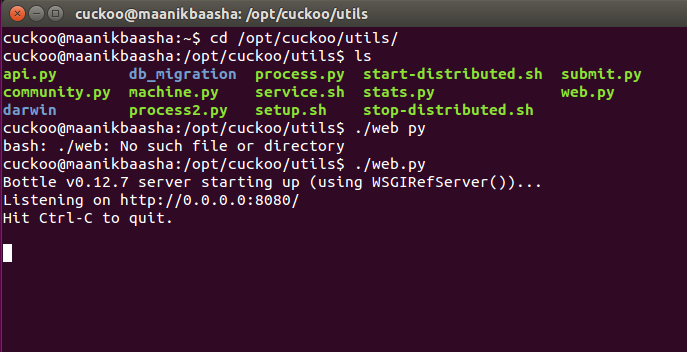 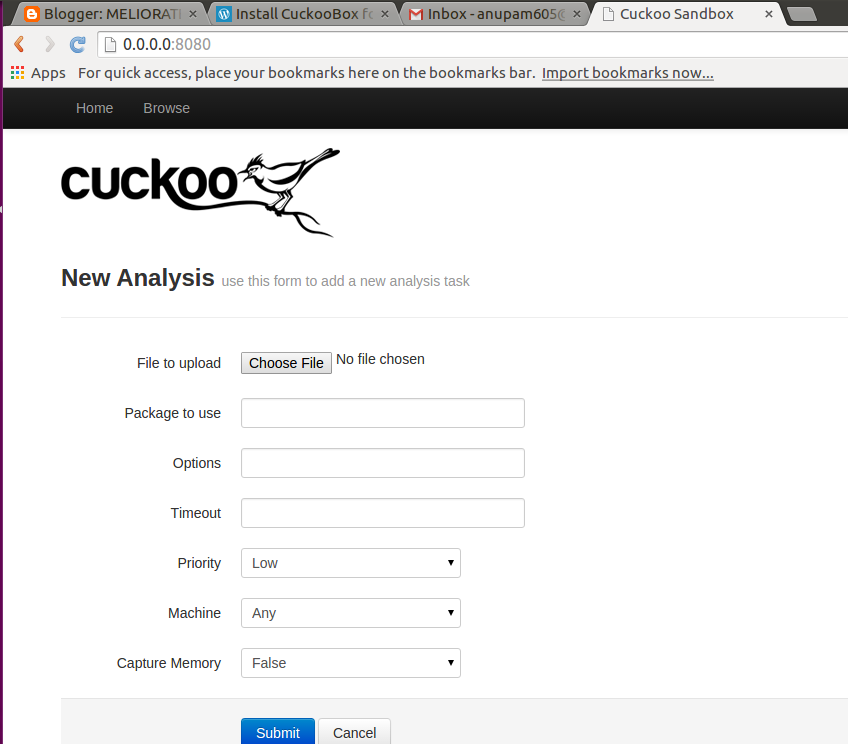 Now you r ready to analyse with the Cuckoo installed....

Return to “Programming and Security ”